“You underestimate the power of the dark side”

It was Sunday. I couldn’t believe how many anglers were out. They were everywhere; on both banks of the river; even on the islands. No one was swinging flies. They were all gear fisherman casting a giant bobber and lead, and an egg fly pattern below, or some red or pink rubber thing that looked liked a giant melting worm. And they didn’t move around much. They parked themselves at choice spots along the river and just stayed there. They just kept working the same spot over and over…hogging it all day. And they arrived early and many stayed late. I figured I’d have to hike a lot in order to find some free water; to find a run that I could swing a fly on and not interfere with anyone. I hoped tomorrow, a weekday, would be quieter; that there would be fewer people out. I was on the Vedder river, in the Fraser Valley, BC. I had driven 10 hours through several high Rocky Mountain passes to get here. What I was witnessing was Carnival like. It was a meat fishery.

The weekdays were a little quieter but there was no way to get away from other anglers. I had my most space the day it rained. The young ones were wearing hoddies and moved around more. The older ones with wading staffs, were more stationary and seemed territorial and surly. By the end of the week I started recognizing faces. A lot seemed retired and therefore fished everyday. Some of the hoddies also seemed to be out daily. On the Vedder you can keep the steelhead. People were there to fill their freezer with fish. There was no real river etiquette. Often when you were fishing a spot someone would appear and start casting right next to you, or go below and cut you off. No one seemed interested in rotating (sharing) a run. Beautiful British Columbia had turned ugly. It was the dark side of angling. 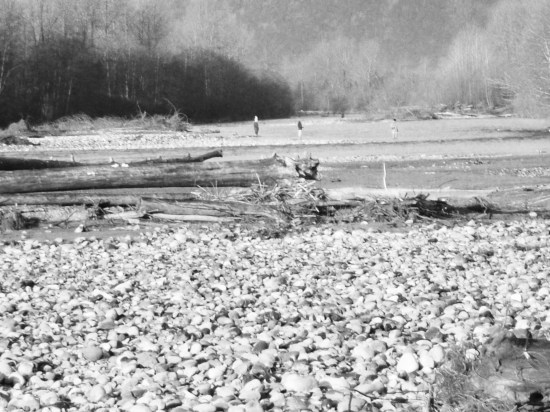 I had booked a motel room for six nights which meant five days of fishing. I wasn’t going to retreat and return to Alberta. I had come too far. I’d stick it out. I decided I’d get up before day light and stake my claim. I’d sharpened my elbows. I’d whistled big husky flies at warp speed past people’s heads if necessary. I’d high and low ball other anglers if they cut in on me. My mantra: ” The only rule is there are no rules”. 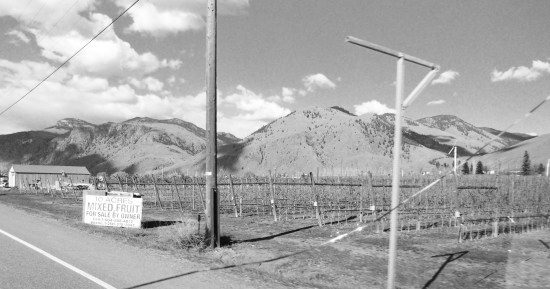 I remember one specific morning at an angler parking area sitting in my vehicle in total darkness at 6 am enjoying a Tim Hortons breakfast sandwich and coffee. I was the only one there; no other anglers around. I had got a head start. My plan once breakfast was done was to hike in darkness to a good river location that was not far way. I was going to get there first and cast fresh water right at day break. The boulder run was going to be mine, “All mine”! Then a truck pulled up. I swigged the last of my coffee, jumped out, grabbed my nap sack and rod and headed full speed to the water. In the blackness I stumbled on the cobble but made it without falling to the head of the sixty yard run (what some people do with their precious holiday time!). I sat down and patiently waited for light. I could see no other anglers around; no silhouettes. It was mine, “All mine”! I felt confident my plan had worked. Then to the right some thirty yards down the run I saw a flicker, then the glow of someone dragging on a cigarette. Dam the Darth Vedder! 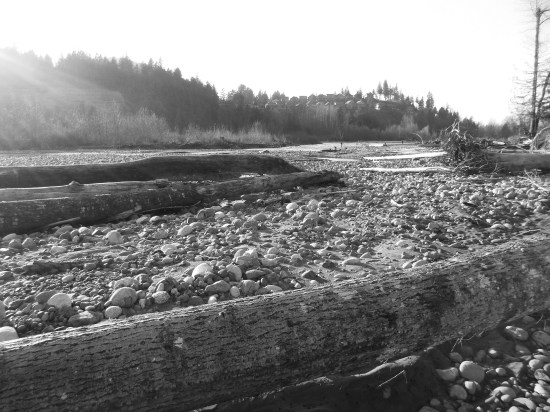 Within a day or two I accepted the reality of the situation. I had to let go of all previous expectations. Then I was able to make space for myself on the river. I made my thousand casts with the faith that I’d eventually connect with a strong winter steelhead returning from the sea. And as the week progressed it got better. I actually got to fish a few runs on my own for a couple of hours. The first hour of the day I had more space. There was also a lull at lunch when the crowds dispersed. If I hiked a lot the last few hours of the day I could often find a bit of clear water for myself. I got more skilled with the two-handed rod. The weather was great for February. It was usually 0 to 5 C at day break and often 10 to 15C by mid afternoon, even if cloudy. The region was beautiful, green and lush due to its proximity to the coast. There was no sign of winter except in the high distant eastern peaks. The cherry trees were starting to bloom. The crocuses were ready to open. In the woods moss gripped the trees and giant ferns carpeted the forest floor; quite a contrast to dry Alberta. The whole place had a rich smell. Hiking to different river locations surrounded by the dense growth was always pleasant. The town I stayed in, Sardis, right next to Chilliwack, was quite beautiful. It had great coffee shops, a nice town river path that was well used and provided easy access to the water. I’d walk the path and scout the river for an open section, then sprint for it once spotted. And it felt good in the middle of winter to be away from the office and to spend the whole day outside, from first light to last, and be comfortable (not cold).

During the several days I was there I saw two fish hooked, of which one was landed. And I had fished within sight of several hundred anglers by weeks end. Everyone said things were slow. I saw maybe five other people swinging flies during my time there. I expected more given the long history of fly fishing for steelhead in BC. On my second to last day I spotted a disturbance in the tail of the run. I watched for a minute expecting to see a duck or an otter appear but none did. I asked a hoddie fellow across the river if winter steelhead sometimes disturb the surface? He said sometimes. I placed several casts just above the place of the disturbance with my garish (orange) colored fly: no response. I decided to change flies. I tied on a black fly, a leech pattern, and took several steps upstream and then started reworking the run. After 2 or 3 casts, a thump. I had finally hooked a steelhead. I had it on for what seemed a minute or so and caught a glimpse of it as I was gaining line, and then it was gone. That was my one and only connection.

I have no fish photos from this trip so decided to include a picture of a Chilean trout caught about 17 years ago on a dry-fly in a little stream that tumbled into the large Futaleufu river, near the town of Futaleufu. It’s a bit blurry but I like the composition: trout, hand, and my golden retriever in the background.

2 thoughts on “The Darth Vedder”