I had to go back East for a few weeks. Yes, had to. Montreal. Every time I return I hope I’ll have a bit of time to myself but that never happens. The week(s) are always hectic and if I get an hour or two on one morning or evening to wander around, I’m lucky. Time there simply blows by and before I know it I’m in Dorval at the airport boarding my flight back West, and wondering where it all went.

When I do get a spare moment I simply want to re-visit the countryside southwest of Montreal, where I grew up. I like driving the narrow back roads fringed with corn fields. There are also large stands of Maples around where you can search for the remnants of an old sugar shack, or as they say around here a “Cabane a Sucre’. Sometimes I drive a ridge along the border between Quebec and New York State and simply take in all the apple orchards; row after row of carefully pruned trees. Rural Quebec is really quite beautiful. For those of you south of the border think New England but with a Québécois twist and signage, and rougher roads; much rougher…check the ditches for hub caps.

This trip I got up real early one morning and drove south through the Chateauguay Valley to a covered bridge which crosses a classic stream. I didn’t have a lot of time…which I guess is a running theme in this post…so I quickly breathed it all in, got back in my car and left in order to get back on time. The brief stop spawned many memories. It’s where I started fly fishing for trout. That was a long time ago. I remember seeing anglers with creels hanging from their shoulders, many smoking pipes. The smell of Amphora tobacco still makes me feel all is right with the world.

I use to pedal my heavy indestructible one speed CCM bicycle to the bridge from my home, a half day journey, and camp in a field that was leased or owned by Boy Scouts Canada. I’d fish for a day or two and then cycle back home. When I got a little older I’d hitch-hike there, cover the water with a big dry, then thumb back. I took a couple of pictures of the bridge on this trip but haven’t figured out how to download them from my phone. Technology, yikes! Here’s a couple of photos I found (stole) on the internet. I didn’t even give the photographers credit. Ok, call La Police!

I flew back to Alberta on a Saturday and although tired decided on Sunday to fish one of my favorite rivers. It would be my last chance this season. I didn’t do well. My head hadn’t caught up to where my body was. It wasn’t jet lag but more like mind lag. It had been an emotional visit.

photo by B L Garnier

It was calm out and there were a few bugs around (tiny olives and midges) but for the most part the fish laid low. Late in the afternoon I managed to find a few good rising trout where insects were collecting. It pays to know a river. I shared the spot with a lone sheep…but he wasn’t in waders. He seemed stranded at water’s edge with an eight foot high bank looming above him. He hadn’t found an escape route even though there was one upstream. He just sat there looking kind of lost and defeated. I tried to “shoo” him in the right direction and he got up and moved well but missed the exit sign. 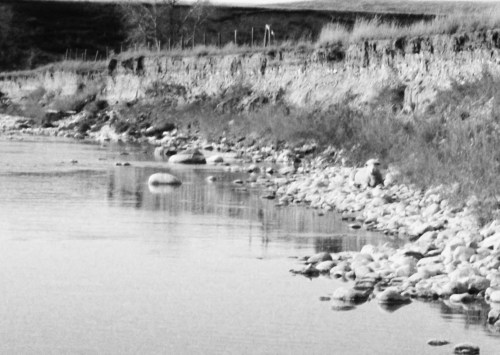 When I left the river I made it a point to stop at the Hutterite Colony where I spoke to a child who was pretending to drive a large tractor. He turned his machine off with his imaginary keys and then pointed to the “Sheepman” who was sitting in an aged pick-up truck thirty feet away with another fellow. I informed the Sheepman about the stranded animal. He said, “We know about him…he’s one of the stupid ones”. I grimaced and explained that the sheep looked distressed being alone and in unfamiliar territory. He looked at me for a second or two with a poker-face, slowly put his truck in gear and as he drove off said, ” Thanks”.

Anyway, I did manage one nice fish on a dry-fly. It made my day just like it did forty-five years ago while standing under a covered bridge.