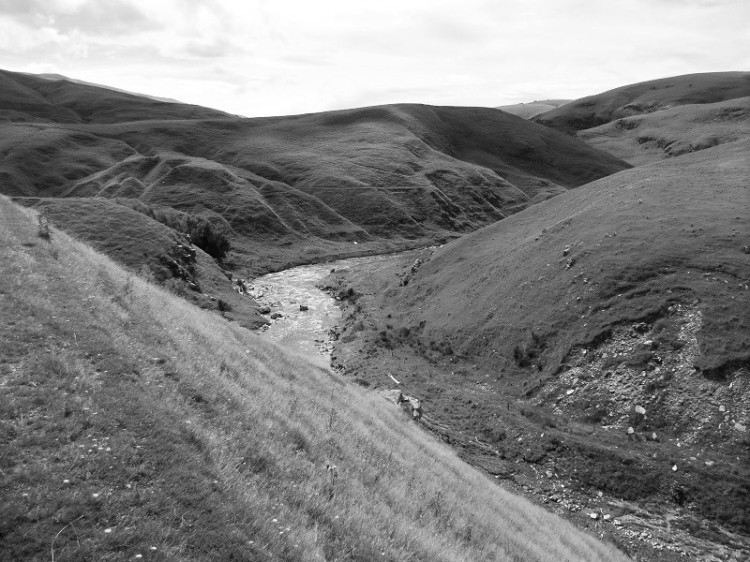 I’m eating fish and chips in a small town hotel pub. It’s about my eighth serving this trip and I don’t even like fish. But the Blue Cod doesn’t taste like anything from the sea. Once I break through the thick batter the meat is light, flaky and delicious. The owner comes over, introduces herself and pulls up a stool. She asks us about our day; where we’re from; where we’ve been fishing; and how our meal is? It takes me several seconds to get in gear and respond. It’s like I’m in some sort of trance like, hypnotic state. That’s what walking a river all day and staring into clear water does to me. It’s like I’ve been in a long deep sleep; or under a spell. It takes me awhile to re-surface; to wake-up. And my mind is elsewhere. I’ve been reviewing the day. I’m thinking about the high station river we just fished, and that one fish.

Brothers of the Angle

We talk to the owner about our day. She tells us about her hotel and the small town we are in. Her husband is behind the bar pouring pints and watching the comings and goings in the pub. Two dairy farmers at the next table join the conversation when they overhear that we have been fishing. One leans over with his phone and shows me a picture of a brown trout he caught this year. My eyes pop and I say, “unbelievable”. The fish is freakishly large; it’s disproportionate. I imagine Goodyear or MetLife stenciled on its side. With my favorable reaction he proceeds to show me a dozen more photos of super-sized trout. He, and hundreds of other anglers, catch the giants on conventional tackle in a canal north of here in the central South Island near the town of Twizel. I drove along the canal a year ago and witnessed the angling scene. The trout position themselves just below a large salmon farm and feed on its effluent and residual food pellets. The location is like an aquatic feed lot; it’s a buffet. The canal is really the antithesis of the locations I have been fishing and a completely different angling experience. But in the end it’s still fishing and the dairy farmers are as excited about their annual pilgrimage to the canal as I am about fly fishing the regions and rivers that I have been on. And excitement, anticipation (dreams) and adventure is what fuels all anglers whether we are casting a worm, a red devil lure or a fly.

Roman gets up from the table and starts playing fetch with the pub owner’s dog, a Border Collie. It chases the tennis ball from one end of the bar to the other, darting between tables as patrons drink and have supper. No one pays attention. It’s obviously a common scene here. The Collie gets so excited with the game that it tries to leap up on the pool table. It doesn’t quite make it, slides off and lands awkwardly on the floor. I watch it for a second. It bounces up and is alright. People briefly look up at the disturbance, then go back to their pints, meals, and conversation. The dairy farmer shows me another picture. It’s a photo of a dozen or so of the giant trout, some 30 lbs plus, stuffed into the back of his pick-up truck. I say, “you eat em?” He smiles and nods.

The pub owner retreats to the kitchen for a moment. The dairy farmers go outside for a smoke. I have time to return to my spell and think about the day, the river and that one fish.

I was hiking a cliff when I spotted it. I almost missed it which is hard to believe given its size and the good lighting…one of the largest wild trout I’ve ever seen. Maybe I wasn’t expecting anything as I had just covered several km’s of river and had seen little. It was lying in the shallows in a little depression. A great spot. I watched it for a moment from my perch. It remained relatively motionless. You’re always hoping for some kind of movement; some sign of feeding. That means you have a chance. I made my way down to the river and got in behind and a little to the side of the trout; perfect positioning. My casts were on the mark. At first I tried a small terrestrial dry, then eventually some larger dries and ended with some wets but the trout wouldn’t feed. I left it alone for an hour or more and then returned. Same result. Roman eventually tied on a big blonde Zonker and tugged it in front of the fish. It simply cruised-off to deeper water where it disappeared. 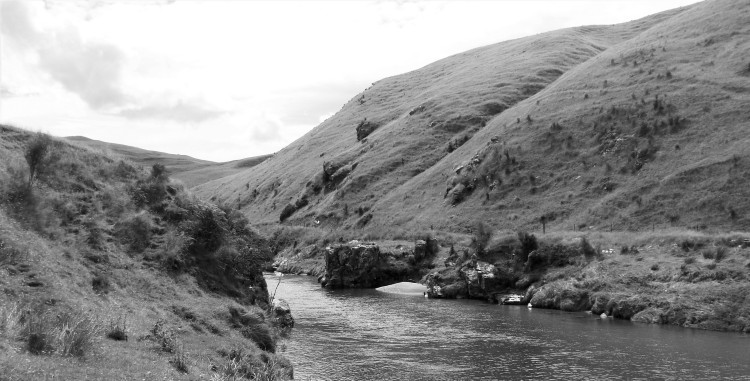 The river is not known for having a lot of fish. It’s a long shot place. If I’m fortunate enough to return some other season, I’d probably have to donate at least two full days to it, maybe more, in order to give myself a fair chance. When you go to a river like that you really are swinging for the fence and you have to remind yourself that home run hitters also strike out the most. You’ve got to be prepared to get skunked. That’s kind of the deal you have to make with yourself before stepping into that river; the deal you make even before you make the long drive up there on the high station road. You go up there for the hunt, the space and the silence, and maybe, just maybe, one great fish.

It’s late. The owner is making her rounds and then goes into to the kitchen. Meal time is just about done. Her husband is still pouring pints. The Collie is circulating through the pub looking for a play mate. The dairy farmers are back outside having another smoke. The place is slowly thinning out. I look up at the bar’s big screen. Championship Sheep Shearing is on. I’m in Waikaka, NZ.