Fly fishing NZ. My fourth trip and another reminder that weather always rules the day. It can rule a week. It can even rule a whole month.

I arrived in the middle of December. The beginning of the month had been very wet. Flying the last leg from Auckland to Christchurch I could see all the major rivers on the north and south islands were high and muddy. The sediment they carried from the mountains to the coast stained the marine blue Tasman sea. It didn’t look promising. Most anglers come to NZ to sight-fish for trout. The key word being “sight”. It’s impossible to see trout in rivers that are a coffee colored torrent. And that’s what I was looking at from twenty thousand feet above. When I landed I learned that the main highway connecting the north to the south end of the island was closed as there were concerns the raging rivers had compromised one or more bridges south of Christchurch. It stayed closed for several days.

I started second guessing my decision to visit in December. In past seasons I fished in late February, early March. Even then, however, weather was still somewhat of a wild card. I remember when tropical storm Gita hit the south island a few years back. Flooding followed making angling challenging for several days in the Southland region. And several days in a two week trip is a significant amount of time. There simply are no weather guarantees in NZ.

A friend, Roman, had already been in NZ for a week before I arrived. His angling report wasn’t good. In spite of travelling many regions, routes and back roads he had not found any clear water. He had hooked one fish on a river that looked promising but then a deluge occurred and the door to opportunity closed.

He ended up calling a number of fly shops and was informed of a river that ran through an urban setting on the eastern side of the island that was clear. He checked it out. That’s where we met when I arrived. The information he gleaned saved our trip and he was rewarded with the trout of the trip: a big sea run brown.

a better picture of roman’s great brown , 8lbs plus 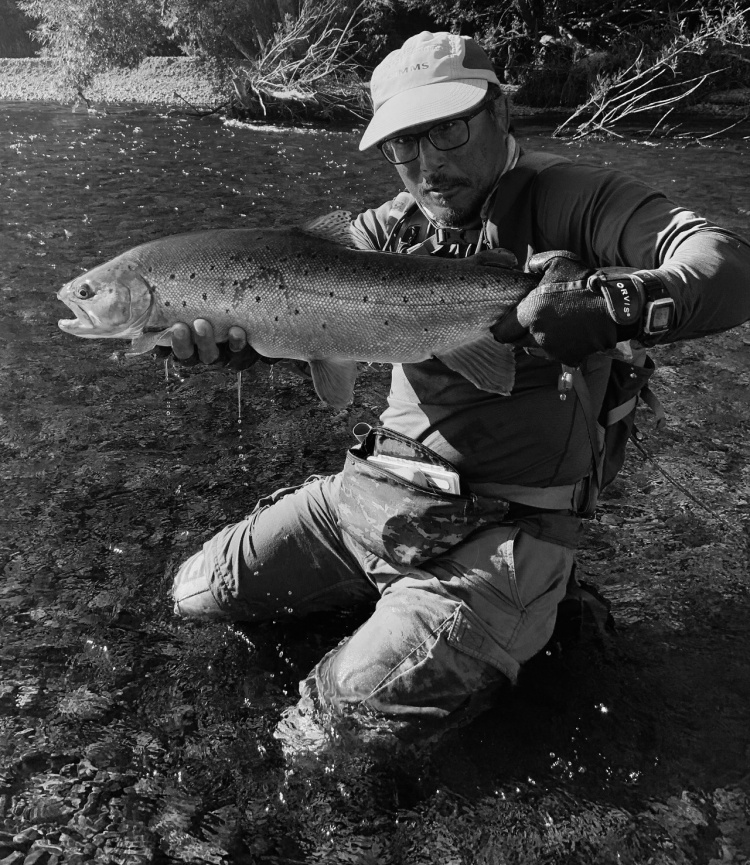 One holiday park (campground) owner told me the river we were on is usually just a “trickle” in mid-December. It’s considered an early season angling location and best fished in October and November. With the frequent rain it still had a decent flow, was easy to crisscross and get to the prime areas. The best spots were where the river rubbed up against banks lined with willows. This is where we located fish and had our most productive angling. These treed sections also cast a shadow that broke the ever present river glare, especially when it was cloudy (which we had a lot of) and allowed us to look into the water and spot fish. We were sight-fishing when most rivers were on flood alert! 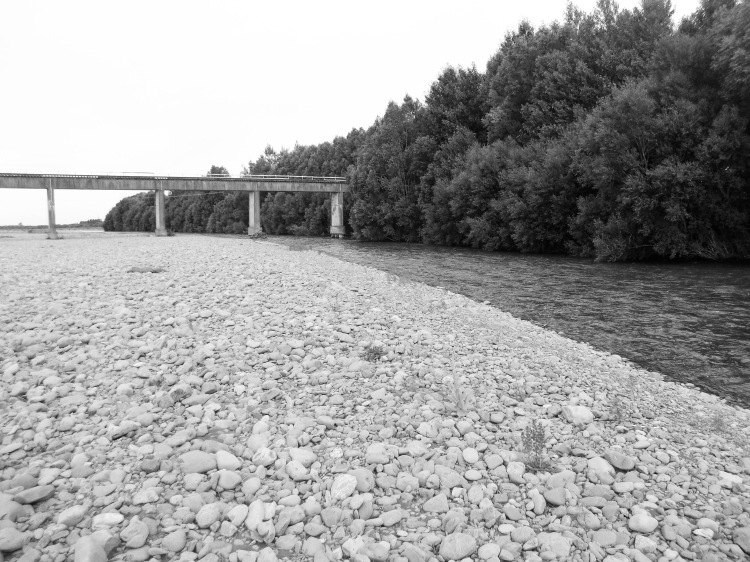 You learn a lot about a river when you walk and explorer it for several days in a row like we did. Some of the pieces of the puzzle start fitting together; you start noticing the tiny nuances…

We often fished within sight of a couple highway bridges their undersides sprayed with colorful graffiti and equally colorful messages. We fished to the sound of the morning and evening rush hour, car horns and sirens. We fished while locals with big wheeled 4X4 trucks occasionally drove up and down the gravel river bed often fording river channels above or below us. It wasn’t what you would describe as a pristine back-country angling setting. But the water was clear and that was the key. Finding clear water was like finding gold. And with the clear water we were able to find something equally precious: brown trout..

The trout were large and extremely challenging. When people say “any fly will do” with NZ trout that’s simply not true. Of course every river is different and has its demands and peculiarities and this can change as the season progresses. Maybe sometimes fly choice doesn’t matter; most times it does. These browns, sea run and resident, were as selective in their feeding as anywhere I’ve ever been and they were wary. I quickly learned that the “plop”of a heavy foam beetle fly, close or even some distance away, scared most fish. Trout lying in shallow riffle sections were also often spooked by large flies drifting overhead. I had to cast small, soft-landing patterns. I even connected with a few trout on a willow grub dry fly. The nuances of a river! 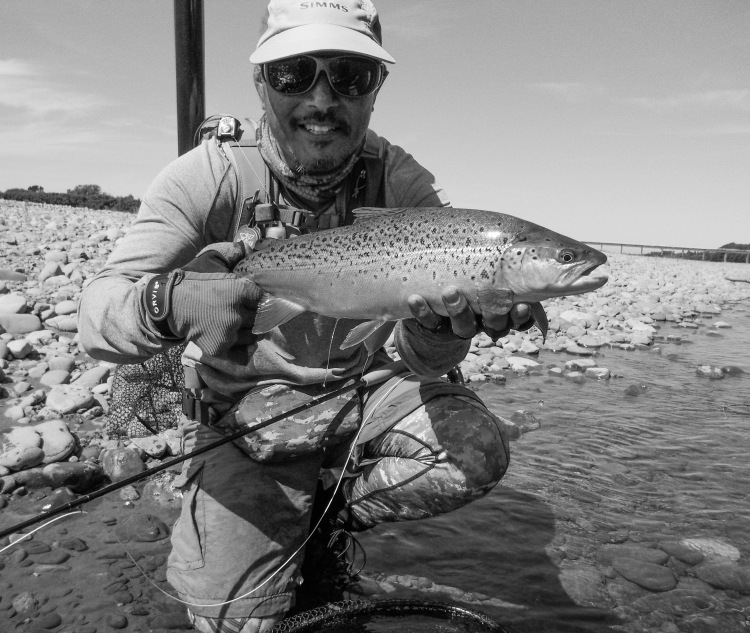 roman with another beefy brown trout

I had a three or four day stretch where I landed a good brown trout every day then went five or six days without catching a fish. Early on we had a couple full sun calm days followed by windy weather and frequent cloud cover. The quality of the lighting makes all the difference in the world when sight fishing. You’ll notice that some of or best trout were caught when it was sunny. During my dry spell I had a couple connections and break-offs as large trout bolted into willow branches to free themselves. I also had a few fish eat my fly but no hook-up. That’s all part of any outing/trip.

In my second week the river flow tripled due to heavy rain, Roman had left, and I went south in search of a clear back-country river. The back-country, however, was still under water. I returned to the river Roman and I had fished when the flow receded a little and managed one more fine brown trout. It was feeding in a shallow riffle section but couldn’t be enticed to rise to a dry fly. I ended-up sight-fishing  with a size 18 PT like nymph, no bead-head, just some wire ribbing on the body for a bit of weight.

Since this is a DIY post my advice when planning a NZ fly fishing trip is bring a lot of flies, from minuscule to fairly large in size: emergers, dries and nymphs. I could have used my midge box on this trip. On one day a size 18 caddis pattern looked gigantic in comparison to what a brown trout was sipping on. Same goes for terrestrial patterns. Bring tiny to large ones. My most effective terrestrial pattern this season and in the past was a small foam ant. You might end up just fishing one fly on your trip. Or you might need to try a dozen different patterns on just one challenging trout. You never know. Because I was arriving relatively early in the angling season (less fishing pressure) I thought I could get away with casting big stuff on some of the rivers I had visited in the past. Well I never got to those rivers due to high flows and flooding, and where I ended up angling was all about small stuff: tiny dry flies and equally tiny nymphs. 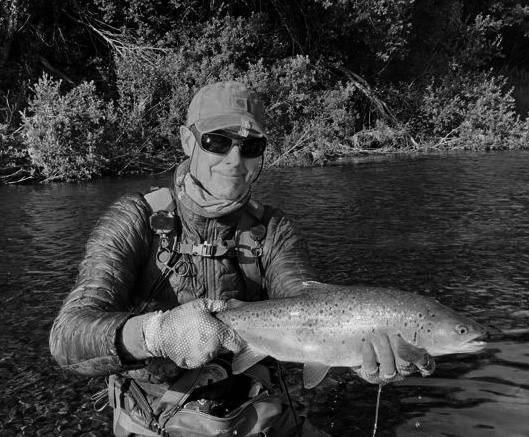 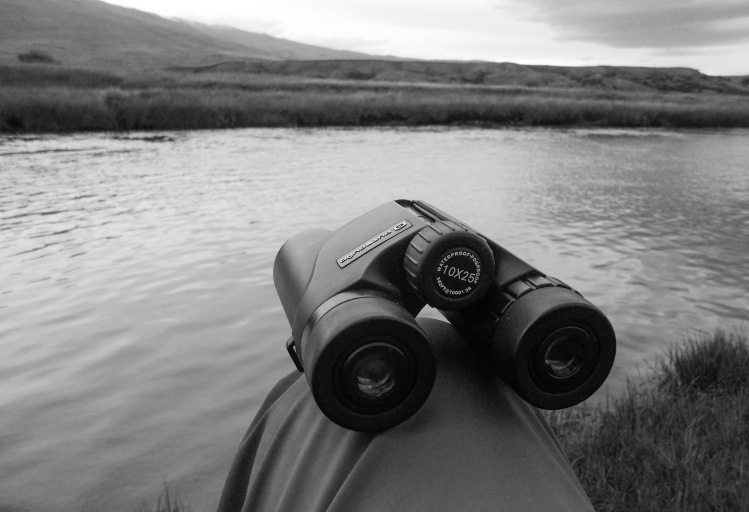 Another adventure and some beautiful brown trout…