In the past three or four years I’ve written 100 plus posts on this blog. One post, above all, received significantly more attention (hits) than any other. It simply blew all the others away…10X more attention. Was the quality of the writing that much better?…”No”. Were the photographs super special or intriguing?…”No”. Were the trout huge?…”No”. Was I giving away cash?…”No”. It was simply the title. It contained the words, “French Assassins”. The post had nothing to do with espionage, mystery or murder. I was simply quoting a phrase/term used by an author in a slow-paced, gentle fly fishing book called, Chalkstream Chronicle, by Neil Patterson. It’s a great book. One of my all time favorites.

In one chapter Patterson describes how some French anglers in economically depressed war-time France, or just post war, survived by designing highly effective flies (killer patterns) for flat water creek fishing (difficult water) that allowed them to fool very discerning trout; I believe they were brown trout. If I remember the story correctly they either kept their families alive with the protein they caught from the streams or they sold the trout to restaurants in order to earn money when there was no employment opportunities in their ravaged homeland. Basically, they fished to survive and because of this they became very skilled and specialized at catching trout on their local water. Thus the term, “French Assassins”. The common feature of all of these flat water flies is that they were tied in a very sparse (airy/light) style.

Above and below are some brown and rainbow trout I caught and released over the last couple of weekends sight-fishing late July and early August. The angling was quite challenging. All trout were fooled on Pale Morning Duns (dry-fly/emerger patterns) size 18 and 16. I got lucky as some of the small fly hook-ups held. I also missed quite a few. 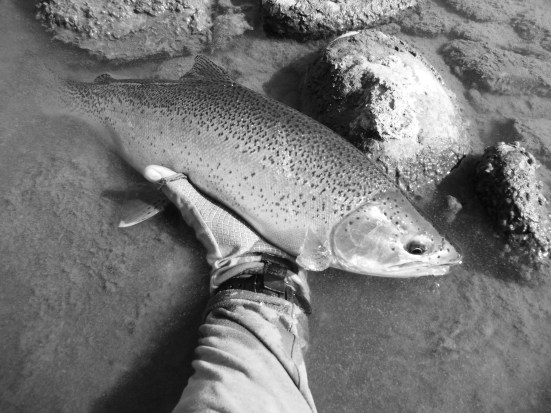